MY CART
or
CHECK OUT
Menu

Aquila Private Game Reserve is a Big 5 safari destination and is dedicated to the preservation and conservation of wildlife. Aquila’s purpose is to protect and preserve Africa’s increasingly threatened wildlife, while being fully committed to social upliftment, job creation, skills development and various sustainable empowerment programmes; through wildlife rehabilitation and re-introduction, land rehabilitation, anti-poaching programmes, eco-friendly tourism and community support.

Creating the ideal, sustainable balance between nature conservation and the empowerment of the local community of Touws River in the Western Cape of South Africa, is at the core of how Aquila operates.

Aquila Private Game Reserve and Spa, ARC and Saving Private Rhino NGO have been honoured to receive the most prestigious South African and internationally acclaimed awards for job creation, conservation and social upliftment.

These awards acknowledge the passion and commitment of the Aquila team and highlights their dedication to conservation, social upliftment, and responsible tourism.

Aquila Private Game Reserve prides itself in the preservation of its environment, with the on-going effort to protect the environment and its wildlife.

At Aquila Private Game Reserve, approximately 100, edible to game trees, are planted monthly. An estimate of 2 000 indigenous trees have been planted in the veld to increase the carrying capacity of the land. Compost from Aquila’s restaurant, horses, elephants and worms are organically used to fertilize our trees.

A miracle plant called “Spekboom”, is able to fight climatic change and improves the quality of breathable air. It is known to have the capacity of taking in about 4 to 10 tonnes of carbon from a hectare’s environment. This it does by acting like a carbon sponge that sucks in all the unwanted carbon.

Each bedroom at Aquila has a small Spekboom plant. Aquila offers visitors an opportunity to plant a tree in Africa as part of our ‘Veld Regeneration Project’. 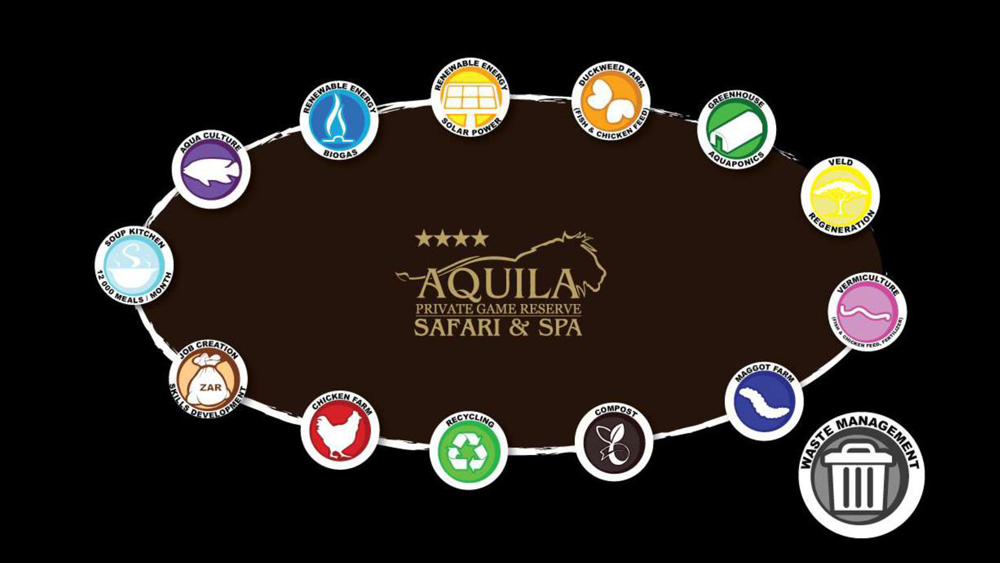 The Eco-Synergy Project is a division of ARC (Aquila Rehabilitation & Conservation Centre).

Aquila has embarked on an exciting exercise to reduce its carbon footprint. This program consists of a number of eco synergy systems that co-exist – amongst others, a waste management program that includes, worm farms and bio gas plants – resulting in community vegetable and herb gardens and an aquaponics system.

In addition to the Eco-Synergy Centre, Aquila has introduces a R3 Billion deal with a world leading international renewable energy company, and have built a concentrator photovoltaic solar plant 44MW CPV on Aquila’s land in order to supply much needed power to the Western Cape grid, in a time of load shedding, and a power shortage crisis.

A second 120KW CPV solar plant was built at ARC and consists of 12 large CPV panels that produce on-site renewable energy used by Aquila and ARC, and thereby, reducing our carbon footprint.

Aquila has a number of systems in place, in the long-term effort to reduce its carbon footprint.

ARC has previously run a Food for Litter campaign that swaps litter for soup kitchen meals with 400 children a day (12 000 meals a month) during most winter months.

From time to time Aquila is fortunate enough to be able to rescue and release animals from the Centre. We have released 3 mountain leopards, numerous lynx, porcupines, owls and many other species. ARC is also home to a newly created Education centre which houses information on our Eco Synergy systems as well as information on the plight of the Rhino.

The Saving Private Rhino initiative was launched after a poaching incident in 2011 to ensure the future conservation of Africa’s rhino and wildlife heritage by providing the most comprehensive integrated anti-poaching solution available free to any private game reserve in Africa that needs assistance defending its wildlife.

Aquila initiated the ‘Saving Private Rhino’ program which is funded by Aquila and contributions from the public. This program extended its operation to now focus on education, rhino rehabilitation and rapid rhino response should assistance be required by private game reserves during any alleged poaching incident: http://savingprivaterhino.org/

Aquila Private Game Reserve is admired for the restoration of pride to the people of the local Touws River community and the conservation of the Karoo land.

As one of the largest employers of the Touws River community, Aquila works closely with local Touws River Municipality, in assisting with the preservation and development of local structures, education of the community, and is attentive to the local culture and community needs.

Aquila believes in the ongoing effort of investing in the future of the community, sponsoring teachers at the local school, soccer and rugby teams, ensuring that the local community obtains a good education and empowering them to succeed in the future.

Aquila also continues to host school children from previously disadvantaged local schools on complimentary day trips to the reserve. Aquila believes that urban children learn more about nature, wildlife, sustainable social upliftment, conservation and responsible tourism in one day, while visiting Aquila and ARC, than could ever be taught in a classroom.

Aquila’s efforts to uplift the nearby Touwsriver community include winter soup kitchens and a recycling ‘food for litter’ campaign.

In Touws River, temperatures can drop to -7 degrees C. Over the years, Aquila has traded over 12 000 blankets during most winter months for litter.

This project ensured that the Touws River community is kept warm, the town clean and school teachers are subsidised.

Aquila believes that our efforts have educated our staff and the community on the value of living responsibly and created an opportunity for them to live more comfortably and sustainably.

Aquila is a business in South Africa that complies with the laws of the country and respects the Bill of Rights and the Constitution. Since inception, Aquila has welcomed guests from various genders, cultures, religions, regions, races or languages and offer all of its guests the same quality of service – with no exceptions.

Our staff are treated with the same level of respect and all religious, cultural or sexual preferences are embraced. Our digital presence celebrates Christmas, Eid and Pride Month (to name a few) – as an indicator of our welcoming nature and workplace.

Aquila is proud to have contributed multi millions in salaries over the last 21 years which has empowered the local community of Touws River and assisted with the creation and sustainability of small businesses within the community (for example, a majority of the doors, bricks and windows in the developments at the reserve have been proudly made by the local community).

Given that one salary feeds multiple persons in Touws River, approximately 35% of the 15000 people in Touws River are directly dependent on the employment opportunities offered by Aquila.

In addition, a majority of the food supplies, veterinarian services, labour, building supplies and material are outsourced by Aquila to local companies.

Aquila prides itself on economic development, upliftment and responsible tourism and has selected candidates from the local community of Touws River to uplift and train such candidates in relation to wildlife, conservation and sustainable farming and development.

The majority of Aquila’s previously disadvantaged employees have been trained in the tourism, hospitality and conservation industries.

Aquila is dedicated to on-going training programmes, including but not limited to, health and safety, security, first aid, firefighting and information technology.

95% of all previously disadvantaged staff members have been trained to be fully competent and certified as game rangers, drivers, waitresses, chefs, registered security officers and anti-poaching guards, housekeepers, front and back of house staff, game capture and translocation rangers.

Members of the Touws River community have previously been awarded Nature Site Guide qualifications in a joint venture with a local training provider, the Nature College. During 6 months of rigorous practical and theoretical in-house training, the aspirant candidates are educated on a variety of subjects such as geology, desert ecology, fynbos, birds etc.

Aquila Private Game Reserve not only provides their qualified guides as mentors to all the candidates, but also paid for the training and evaluations.

ECONOMIC VIABILITY OF THE BUSINESS: MANUFACTURE RATHER THAN BUY

Instead of buying doors, windows, bar counters, stair cases, tables, benches, and bricks for building; Aquila prides itself in the creation of manufacturing opportunities, which in turn results in job creation, leading to the economic viability for the business.

The property accepts guests from across the globe and needs to encourage and implement the highest level of health and safety. Ongoing training is offered to all staff and the property needs to comply with various international standards in order for it to accept guests.

Further to the staff training and minimum standard property requirements, our guests can visit in conform knowing that we comply with the Labour relation and Health and Safety recommendations of the South African Government in order to have a valid grading certificate.

Looking into the future, we are already implementing health and safety protocols for a post-COVID operation and will welcome guests to a safe and hygienic safari experience. Guests can familiarise themselves with our Safe Service Safaris protocol: https://aquilacollection.com/safe-service-safaris/

Further to the abovementioned, all the tourism bodies that Aquila belongs to and participate in, require us to offer the highest standards possible to our guests and offer world class training and skills upliftment to our staff.

Although all guests sign in with an indemnity, we also offer reassurance to our agents and suppliers of our liability insurance cover.

ARC (Aquila Animal Rescue and Rehabilitation Conservation Centre) is a non-profit section 21 organisation # 2004/011009/08
It was established as a sanctuary for animals that can never be released into the wild again and a temporary home for those who need attention before being released into the wild.

On the 29 April 2008 Searl Derman, the owner of Aquila Private Game Reserve and Spa, came across a newspaper article headlining how the fallow deer and rabbits were starving on Robben Island. Searl Derman immediately contacted the appropriate authorities asking how he could assist them. He then set out to meet with Robben Island, and the other involved parties in order to find a solution to the problem at hand.

From time to time Aquila is fortunate enough to be able to rescue and release animals from the Centre. We have released 3 mountain leopards, numerous lynx, porcupines, owls and many other species. ARC is also home to a newly created Education centre which houses information on our Eco Synergy systems as well as information on the plight of the Rhino.

A desperate drama is playing out at Aquila Private Game Reserve, in the western cape, after the birth of the third baby rhino in the past 3 months. The two calves born, one in October and the other in mid-December are both thriving, but the third calf, born in the early hours of this morning (New Years Eve) is being rescued from dehydration after being rejected by its mother. To further complicate matters the calf has attached itself to the father, who is very aggressive and is making it impossible for Vets to get near the calf.

The “Saving Private Rhino” initiative has been established to ensure the future conservation of Africa’s rhino and wildlife heritage, by providing the most comprehensive, integrated anti-poaching solution available to every private game reserve in Africa which needs assistance defending its wildlife.

Cape Town’s Big 5, Aquila Private Game Reserve, was created 15 years ago, and is named after the rarely-sighted Black or Verreaux’s Eagle (Aquila verreauxii). This raptor is regularly seen from a distance by eagle-eyed rangers and Aquila’s guests.

As part of a leopard monitoring programme, Aquila staff place cameras at the site of recent kills made by several of the elusive and endangered nocturnal Cape Mountain Leopards that hunt on the Reserve.

The re-introduction of safari game and the Big 5 to the Western Cape (buffalo, leopards, lion, elephants and rhino). Aquila is proud to have been the first game reserve to re-introduce the Big 5 (for the first time in 250 years, since they were shot out by colonial hunters).

Aquaculture / Aquaponics: Approximately 30,000 tilapia fish are based at ARC and Aquila. Aquila’s menu has been restructured to include these fish where possible.