He added that the translocating of the elephants was a mammoth task, and expressed the excitement of the reserve’s teams in the successful release of these elephants at Aquila. “No expense was spared to ensure a team of researchers, vets and conservation staff kept a keen eye on the process while monitoring the behaviour”.

One of the new elephants introduced at Aquila was orphaned and rehabilitated before being reintroduced to the wild. Being born in captivity, the other elephant offers the conservation teams a great research opportunity, observing it now, roaming free, alongside the other Big 5 and wildlife on the reserve.

According to the team overseeing the translocation and introduction, Aquila offers the ideal home and place for the release of these two elephants, stating that they are now given the opportunity to settle, and live a comfortable free roaming life with other wildlife.

Although the release and introduction were considered a success, it did not occur completely without incident when one elephant had a standoff with a rhino. “After a big display of mock charging, trumpeting and ear flapping, both parties walked away uninjured and happy,” said Derman.

The elephants spent their first day exploring their new home and interacting curiously with the other wildlife. Derman said that the meeting between the reserve’s animals and one of the Aquila elephants “was a beautiful moment as they humbly greeted each other and immediately bonded”.

The on-site research team confirmed that the introduction of the elephants went better than they expected and added that this had been one of the “best releases” they had witnessed. They added that the elephants’ anxiety and stress levels are minimal and “their trunk attitude and body postures satisfying”.

It is important to note that Aquila Collection has a strict “no touch and interaction” policy and guests will only be able to see these majestic animals while on a game drive on this 10 000 hectare conservancy.

Over the past 22 years, Aquila Collections has been awarded the most prestigious local, national, and international awards for its conservation, sustainable tourism, social upliftment efforts and guest experience.

“Most notably, the Imvelo, Lilizela and Australian Steve Irwin (Crocodile Man) award is a testament of its efforts to afford guests the opportunity to witness real wildlife conservation efforts just less than two hours from Cape Town,” added Derman.

Most recently, Aquila added the prestigious Skål International Sustainable Tourism Award for a large tourism establishment for international responsible business practice to its arsenal of awards.

Derman concluded: “Moving and reintroducing wildlife is always risky, and I would like to thank the teams for overseeing the translocation of these beautiful animals. It is extremely gratifying to witness this moment and we are proud to continue our wildlife conservation work while expanding our wildlife populations”. 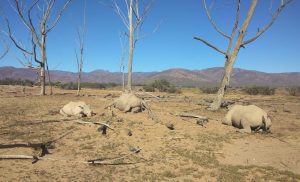